Shamrocks & Midleton salute the hurlers of 1916

One hundred years is a long time, but in the GAA the heroes of yesteryear even though it maybe a century ago will never be forgotten and so the Shamrock and Midleton Clubs came together to salute their 1916 teams that contested the Senior Hurling Final on that historical year in our nation’s history. The Senior Hurling final of 1916 was played in The Cork Athletic Grounds on Sunday October 16th between Midleton and Shamrocks with the then County Board Secretary Tom Irwin the Referee. Midleton 4-0   Shamrocks 3-2.

The Shamrock Club hosted a function in Ringaskiddy where there was a large gathering drawn from the two Clubs. The Midleton group were led by their Chairman Mr. Liam Ryan and Shamrocks were led by their Chairman Mr. Pat McCarthy. It was an occasion enriched by wonderful people who were in attendance, many of whom had contributed greatly to their respective Clubs both on and off the field.

All Ireland medals were a plenty with John Fenton, Kevin Hennessey and Paddy Fitzgerald amassing a fine senior collection. Adrian O’Driscoll and Michael Prout from Shamrocks have a fine collection too including Minor Hurling, Intermediate Hurling and Junior Football.

The occasion and the marking of the centenary year were recognised in a very special way by the Clubs. Both Clubs commissioned suitable momentos. The Shamrock Club Presented Silver Salvers suitably inscribed and mounted on Midleton Distillery Oak. The Midleton Club produced a remarkable framed citation acknowledging the final and some of its outstanding players and included a medal won a Shamrock player.   On behalf of the Midleton Club, their 1966 All Ireland medal Winner Paddy Fitzgerald accepted the Silver Salver from Shamrock Club Chairman Pat McCarthy.   Jerh. Coveney, Senior Vice President accepted the memento on behalf of Shamrocks.

Then John Fenton then presented the framed Citation to John Twomey representing the Shamrock Club. This set the scene and allowed the large attendance to engage in the great spirit of the momentous occasion.

Two players who played in the 1916 final went on the play Senior Hurling with Cork and were members of the Team of 1919 that won the first All Ireland wearing the red jerseys.  They were Frank Kelleher of Shamrocks and Richard O’Gorman of Midleton.   Three members of the Shamrock team Ned Frizelle, Tom Livesey and Frank Kelleher played on the Cork Junior Hurling team of 1916 and won All Ireland Medals.   Jim Russell from Shamrocks went on to play Senior Hurling with Cork.   Michael Cotter, who played at full back, played Senior Hurling with Cork in 1912. He was a member of a Cork Senior Hurling team that played Tipperary in the town of Mechlin in Belgium.   This was an Exhibition Hurling game to mark the 1912 Congress of Celtic Nations. It was the first Cork team ever to travel abroad.  In 1923 many of the Shamrock players were still playing and they won the Beamish Shield and Senior Hurling League Final that year. The team was trained by the local Curate in Ringaskiddy, Rev. Fr. Tim Murphy.

The occasion was enhanced too by the presence of relatives of some of the team members. Mrs. Pat Howard’s father, Tom Livesey and Uncle Jim Russell were team members. Martin Murphy from The Kennel Boreen was there acknowledging his grandfather John Murphy who was the Club Chairman in 1916 and also one of the Club’s founding fathers of 1898. Terry Frizelle was well represented on the team by his father Ned and Uncle Bob. The Captain of the team was Ned Flynn from Shanbally and his cousin Pat Touhy was there to sing his praises. The Flynns were an old Gaelic family and Ned’s father refereed the Senior Hurling County final of 1890. The goalkeeper was Michael Cusack and he was represented by his niece Helen Prout, a Vice President of the Club and a former Treasurer. Her son Michael was in attendance too, surely one of the Clubs most distinguished players in recent times having played hurling and football with many Cork teams and won four All Ireland Medals, two in hurling and two in football. The Secretary of the Club in those days was Ned Lynch NT at Ringaskiddy School. The Treasurer was John Packie McSweeney a brother to Lena Mulcahy who was renowned over the years for treating injured players with her own lotions made from wild herbs.   The past was truly filled with wonderful people whose spirit and enterprise provided firm foundations for the generations that followed.

Included in the gathering were Donal Brady, winner of a South-East Cork Hurling Medal in 1963, Denis Allen, a former Club Secretary, Pat O’Neill, another former Secretary and Club Trustee, Neally O’Mahony, one of the greatest players over to wear the Shamrock jersey, Anthony Ronayne, another legend of the past, Colin Brady, our current Hurling Team Manager, and David Nolan N.T. Shanbally NS and Manager of our Minor Teams, who have brought the Clubl much success in recent years. Also present was Elizabeth O’Grady (nee Andrews) whose family have been associated with our Club every year since its foundation in 1898. Her Grandfather and Grand Uncle, George and William won Junior County Medals with Shamrocks in 1908.

Good occasions and good nights never last long enough but the memories and exchanges generated on this historic and memorable evening will provide much for us all going forward. May all the mighty Hurlers of Midleton and Shamrocks who thrilled the crowds in The Cork Athletic Grounds in that October Sunday afternoon in 1916 rest peacefully in that great playing field in the sky. 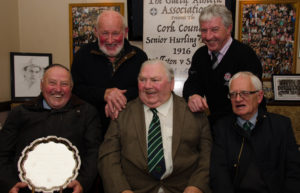 Last Academy of 2020 this Saturday at 10.30am (football), big effort from all players and parents to finish the playing year on a positive, spread the word, we might even have a surprise in store on the day, see everyone on Saturday ready for action ☘️☘️ ... See MoreSee Less